When I was a kid, I remember the time that I stayed out to play too late. We lived in a small coastal town and the neighbor kids and I were free to play outside during the summer. Our house was at the end of a block bordering on empty land and a canyon of virgin Douglas Fir trees.

My Mom put the porch light on. This was the signal that I was supposed to come in from play.

In any case, when I got home my Mom had worked-up a fever of concern. “I was worried sick!” she said. “I was about to call the police and start a manhunt!”

I don’t know about the manhunt, but the sick part was true enough. Her worry had literally caused her stomach to ache as well as emotional distress.

I suppose it is. It can make you take action. It wouldn’t have taken much more time before worry would have prompted Mom to do something to find her lost boy. Maybe the threatened police manhunt. Maybe a private search with Dad. Maybe just some old-fashioned hollering on the front port. Something. In that case the worry would have been useful. It would have caused some positive action to take place.

But what about worry that has no action?

Most of these worries have no subsequent action to be taken. They don’t have a real purpose—other than making us sick, of course. 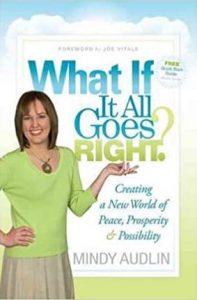 In Mendhi Audlin’s book What If It All Goes Right, an alternative to purposeless worry is proposed. She asks us, instead, to consider the positive possibilities. Since we’re not going to take action on our worries, why not flip things to the positive.

Why not think, “What if Larry is still just enjoying time with his friends?” Why not think, “The economy always rebounds—it will this time, too.” Why not embrace the idea of positive possibilities. What if it really does all go right? Wouldn’t I be healthier with those thoughts?

Of course, if worry prompts you to take action, that’s good. We should improve our lives when we can. But, if we’re not going to take action, why make ourselves sick? Let’s dwell on the positive possibilities, instead. We’re less apt to get sick and more apt to see the positive potential that exists all around us. When we let-up on worry, our hearts open to more creative thinking, to Love and to Abundance.