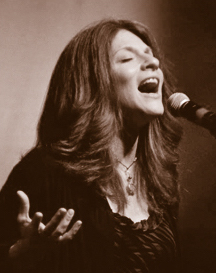 LAURA BERMAN – Originally hailing from the NYC music scene, Laura Berman tours extensively nationwide and has reached acclaim for her soul-touching vocal power and accessible yet poetic songwriting style. Laura is called toward
an inward journey, and connecting with others through her music and voice, and makes her life work about healing, expression and expansiveness. She has performed alongside best-selling authors Neale Donald Walsch and Marianne Williamson as well as at the renowned Agape International Spiritual Center in Los Angeles.

While in NYC, Laura was a session singer
as well as a touring singer/songwriter, sang back up for Grammy Award Winner, Enya, on the David Letterman show, and was a featured vocalist in the children’s feature film release, “Clifford’s Really Big Movie” and accompanying Soundtrack.

She now calls the Pacific NW her home, with her husband, songwriter and producer Craig Benelli. Laura’s latest CD release, “Everything in Between” speaks to many dimensions of a life journey, and is available now via iTunes and CD Baby.

“There are some things that can only be possible through divine intervention. And if you have any doubts about the existence of a Higher Power, Laura Berman’s voice will shake you. Her voice isn’t just that of an angel. There’s a whole heavenly gospel choir channeling itself through that tiny frame. It’s a wonder the force of it doesn’t lift her off the ground…” —Jennifer Layton, Freelance Writer