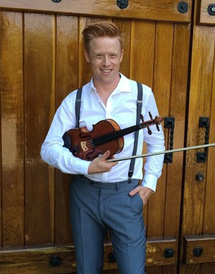 Traveling to far away lands and defining his musical landscape in studio, TYLER CARSON has discovered a new sound for the violin. Growing up trained as a classical violinist (solo artist with the Victoria Symphony age 13) and a folk ‘fiddler’ simultaneously, Tyler was always headed in a unique direction. Inviting musicians who share his approach to receiving music, Tyler seeks to redefine expectation. “I’ve never felt that music came from me. It always felt like it came through me.”  A key point came for Tyler when he traveled to India in February 2013. He was invited to offer a solo violin performance in a unique spiritual community called Auroville in south east India. The performance was recorded by Auroville radio and became his debut solo album “Living Violin“. Bringing these experiences home with him, Tyler has transformed the way he plays. Through a heart centered approach he has found a truly unique way to create and share music.

“During the course of a performance you begin to hear, feel and understand the vocabulary in the chapters of the musical story being told through Tyler and his violin. There’s a richness and poetry in his playing, in his relationship with his instrument, in the scope and depth of the sound, that is unlike any music I’ve experienced before.”
—Nicole Moen, Event Producer/President, Healing Cities Institute Society