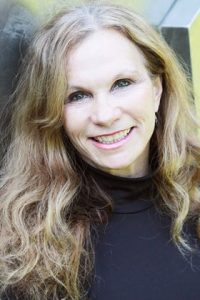 PAULETTE HOLLEY grew up singing and playing the piano in Eugene, Oregon.  She began singing in choirs in high school and college. She belonged to various church choirs including a choir for the Science of Mind  Church in Keaau, Hawaii and the MCC Ensemble in Pahoa, HI.  Later, she rejoined the Peace River Choir for Center for Spiritual Living in Keaau, Hawaii.  A friend suggested Paulette might enjoy singing blues and jazz, so she played bass, keyboards and sang with Meow Mix and Female Trouble until she moved to Portland in 2014.

In 2015, she joined Resonate Choral Arts and sang with Murmuration, a women’s choir, under the direction of Kristen Gordon George. With the tutelage of Ken Brewer, she began to branch out and sing and write original music which included blues and spiritual music. She is also getting coached by LaRhonda Steele.  She sings at the Trail’s End Jam on a regular basis.  She currently sings with the Friends Gospel Choir at Portland Center for Spiritual Living and the Portland Interfaith Gospel Choir.