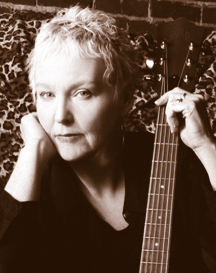 Ellen has fronted bands continuously now for 30 years, as she has three critically acclaimed albums in addition to the latest effort. She was captivated by music since she was a child growing up in Fort Lauderdale, Florida. Leaving the humidity and the taffeta dresses of her accordion marching band behind, Ellen branched out to blue grass, gospel, rock, blues and jazz. Her eclectic tastes in music include heroes such as Ray Charles, Ella Fitzgerald, Joni Mitchell, and Bonnie Raitt.

Ellen is known for her astonishing vocals, as she gracefully moves among genres from blues to jazz to funk and ballads. Her percussive rhythm guitar work is well suited to her voice, and she plays solo, in duos and trios, up to a full nine piece band complete with a horn section. She’s won numerous awards for her work, including consideration for two Grammy Award nominations in 1999.

Speaking of such, Grammy award producer Dennis Walker had this to say after working on the third CD, Standing at the Sunrise: “She not only sings like an angel, but brings her own styling and phrasing to every song that is completely individual. Thank God for Ellen Whyte who is one of the last few who can still sing blues and pop and jazz, and still stand up on a stage and sing big band standards with the best of them.”

Ellen, guitarist Garry Meziere, and her husband John Mullin, have collaborated with veteran musicians – “The ‘A’ List Commandos,” as Ellen likes to refer to them – to produce a sophisticated, yet accessible sound that synchs up well with thoughtful and emotionally infused lyrics.

In addition to the Northwest, Ellen tours in the Mid West and on the East Coast, and was a featured artist in the International Blues festival in Montreal. Look for her soon at a “Four Way Stop” in your area!

“She not only sings like an angel, but brings her own styling and phrasing to every song that is completely individual.”