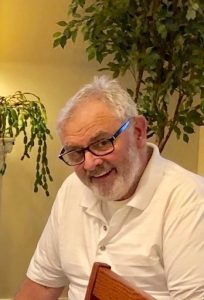 Ken’s hometown was Phoenix, AZ, where he went to high school at Paradise Valley High School. He graduated from Arizona State University in 1981 with a degree in economics and management and then went on to graduate from Palmer College of Chiropractic West in San Jose, CA with a Doctor of Chiropractic degree.

Ken underwent Practitioner training under the direction of Rev Michael Beckwith at Agape, in Los Angeles California and was licensed in 1999. Additionally, he has been a certified facilitator in the self-esteem workshops of Jack Canfield.

He was a health coach and enjoyed empowering people to a richer, active life. He considered himself to be a connector and enjoyed networking to bring people together for common causes. He was a leader and enjoy bringing teams together to accomplish great things. He had been a manager at GNC until a few months prior to his transition.

Ken was one of the licensed practitioners here at PCSL and came to us from Boise, ID in 2015. Ken was a very compassionate person, leading our hospital visitation ministry.

Ken’s memorial was held at the Portland Center for Spiritual Living on Saturday, February 23rd at 12:30 PM. You can listen to the one-hour memorial (including personal sharing) online here. The audio contains the song “The Time Has Come,” used with permission by Marci Beck and performed by Ken Brewer.

Ken was one of the administrators for a Facebook Group called Poetry Lovers Sanctuary. Ken loved poetry and wrote some beautiful poems, one of which was recently published. Here is the poem Ken wrote and posted 4 days before his transition:

Then one day life opens up
Tentatively, feet first you emerge
from the womb, chrysalis
Wings fully orbed in splendor
Recognizing the inner mysteries
The magic of flight
Knowing the call to mate
and die this same time tomorrow